All Court hearings will be in person beginning April 8, 2022. The Court will continue to conduct hearings via ZOOM if needed. If you would like to request for a hearing to be conducted via ZOOM, please file a Motion form with the Clerk’s office for the Judge’s review.

All criminal, civil, and traffic hearings are open to the general public. Please review our Courtroom Rules and Protocols. You must wear a mask at all times while in the Tribal Administration Building and in the Courtroom. If you have any questions regarding the Court docket, please contact the Court Clerk’s office. The Court docket is subject to change due to continuances or other motions to the Court. 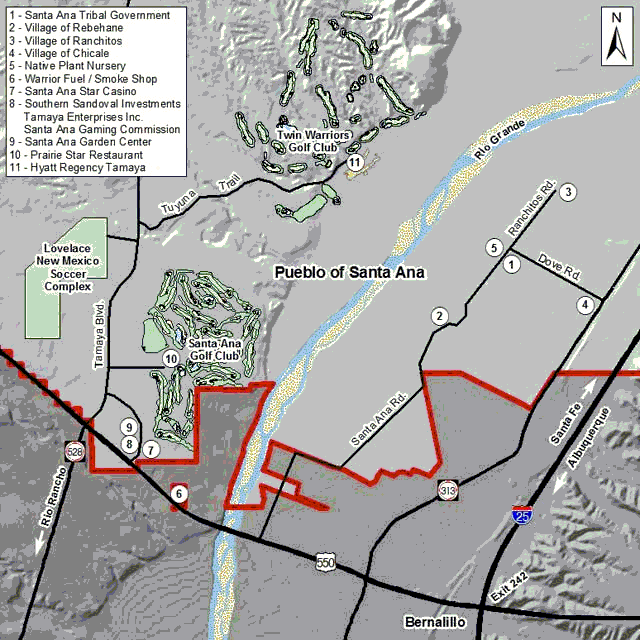 The Courts of Santa Ana

Santa Ana’s court was originally traditional court headed by the Lt. Governor, who is the Chief Traditional Court Judge and the Governor is the Traditional Appeals Court. In 1992, the Pueblo of Santa Ana Tribal Council, by resolution, bifurcated its judiciary and established the Contemporary Court. The Contemporary Court’s subject matter jurisdiction is determined by federal law, Santa Ana legislation, and ordinances enacted by the Tribal Council.

The Contemporary Court (hereinafter, “Court”) consists of a Court Administrator, a Deputy Clerk, Healing to Wellness Case Manager, Probation Officer, Judicial Officer, Public Defender, Prosecutor, and a Judge. The Judge is a law-trained Judge, and a member of the bar of the State of New Mexico. The Pueblo holds Court three days per week (Monday, Wednesday, and Friday).

“The Contemporary Court can hear all criminal matters and civil matters unless the matter is the exclusive jurisdiction of the Traditional Court.”

The Traditional Court has exclusive jurisdiction over 4 issues and the Contemporary Court cannot hear disputes related to these issues.

c. Traditional problems for which a criminal complaint is not filed; and

The Court of Appeals for Traditional Court.

The Court of Appeals for Traditional Court is the Governor.

*Due to Ex Parte issues please do not attempt to contact the Judge about your case. Please contact the Deputy Court Clerk or the Court Administrator who will assess your needs and route any non-ex parte calls to the Judges.

The Santa Ana Healing to Wellness Court seeks to reduce recidivism among non-violent offenders by actively supporting the community members to live healthy, spiritual, sober lifestyles and to be caring positive role models for future generations. The program provides consistent and ongoing structure so the participant will benefit from the treatment experience. The Healing to Wellness Court is doing this by bridging partnerships with service providers and community resources to effectively address the needs of court involved substance abusing adults. The goal of the program is to help participants develop skills necessary to overcome the effects of addiction, to improve their lives with the development of responsible behaviors, and to focus on the overall wellbeing of the participants. The program is designed to help participants to overcome drug and alcohol related problems. The Healing to Wellness Court provides, coordinated court supervised therapeutic programs and support designed to help individuals get free of alcohol and drugs and helps the participants reconnect with family, community, and their cultural practices.

The Court Judicial Officer’s duties include the following:

The dignity of the Court is always to be respected and maintained. Everyone, unless physically challenged, must rise when the judge enters and remain standing until the presiding Judge or the Court Officer invites everyone to be seated. Similarly, when Court adjourns, everyone must stand until the Judge leaves the Courtroom. Attorneys/Counsel may address the Court when invited to do so. Only counsel, their clients or anyone else associated with the case being argued may address the Court, unless a judge directs otherwise.

All persons entering a courthouse must undergo security screening, which may include searching of all persons, clothing, packages, purses, briefcases and any other containers. Metal detecting hand wands/ scanners may be used to scan everyone who enters the facility.

The following items are prohibited in the courtroom and adjacent lobby area:

The procedures outlined above can cause short delays on busy days. Visitors should plan to arrive a few minutes early, to avoid being late for scheduled court proceedings. Please understand that these procedures are for your safety, and the well-being of everyone who visits and works in our facility. These Courtoom Rules and Protocols are also posted as soon as you walk in to the Courtroom.

Thank you for your cooperation.

Per Rule 3. of the Rules of Procedure for the Contemporary Court;

An annual admission fee shall be set Court and must be paid before any appearance is made. The renewal of the admission fee is due every twelve (12) months from the date of admission.

COOPERATION WITH OTHER COURTS AND JURISDICTION

Unless the Pueblo of Santa Ana Court has issued a countervailing order, the bail bond for specific alleged offenses pending arraignment or trial shall be as outlined below:

All in-person payments for fines and fees are made to the Pueblo of Santa Ana Finance Department at:
Santa Ana Tribal Court
02 Dove Road
Santa Ana Pueblo, NM 87004

All in person payments will be made either by cash or money order. The Court does not accept checks or payment by credit card.

The Pueblo of Santa Ana Finance Department hours of operation are:

Payments Made by U.S. Mail

You can mail in a money order payment through the U.S. Mail to:

Please included the case number and/or copy of the citation with the money order.

The court will forward your money order to the tribal finance department and once the receipt is prepared, we will mail you the original receipt and record the payment in your case records.

This provides answers to many of these procedural questions.

WHAT IS A CRIMINAL CASE?

Generally speaking, a criminal case is any action whereby the defendant is accused of violating criminal laws.  The Pueblo has adopted the criminal laws found at 25 Code of Federal Regulations Part 11, Chapters 30 (Criminal Code) and Chapter 66 (Traffic Code) of the New Mexico Statutes Annotated, and other Ordinances passed by Tribal Council. The Pueblo of Santa Ana laws, ordinances, and rules of procedure can be found on the tribal court website. When a police officer files a Criminal Complaint, Criminal Summons, a Statement of Probable Cause, or an Affidavit for Arrest Warrant, the Complaint will make reference to the Section of the Law and Ordinance Code that the Defendant is alleged to have violated.

The Judge will review the Criminal Complaint and Statement of Probable Cause filed with the Court by the arresting law enforcement officer. The Uniform Pueblo of Santa Ana Bond Schedule is used for setting bond at time of arrest.  At arraignment the Judge will look at the nature and circumstances of the offenses, the character, previous criminal record, and place of residence of the accused. The Judge will take into consideration the crime(s) charged, maximum penalties, a violation of previous court mandated probation orders, and among other things, flight risk. The Judge will then modify or leave the bond or order the release of the defendant on their own recognizance, Electronic Monitoring Services or to a Third-Party Custodian.

A bond may be posted at the Tribal Finance Office (cash or money order only) and a copy will be given to the Court. This may be done during regular business hours only.

Bond also can be posted at the Sandoval County Detention Center (money order only) anytime.

If you are not able to post bond, you will remain incarcerated until your scheduled arraignment date.

WHAT HAPPENS AT ARRAIGNMENT?

DO I NEED TO BE REPRESENTED BY AN ATTORNEY?

Upon the Defendant’s first appearance they will be given an opportunity to have a Public Defender assigned, or represent themselves (ProSe), or hire an attorney of their own choosing. If the Defendant choose to hire an attorney, the attorney must be or become licensed to practice law in the Pueblo of Santa Ana Tribal Court. The attorney application for admission is on our website.

WHAT IS THE ROLE OF THE JUDGE AND WHY CAN’T I SPEAK WITH HIM/HER DIRECTLY?

The Judge enforces the rules of the Court and the Laws of the Pueblo of Santa Ana.  The Judge cannot take sides so he/she cannot assist or discuss your case with you outside of the court hearing.

The Judge must hear both sides of the dispute and, based on the facts presented, make a fair and unbiased ruling.  For this reason, the Judge will not engage in ex parte communications with the litigants. That means the judge will only talk about the case in court and in front of the other party, and those hearings are recorded.

This protects the integrity of the Court and ensures that the Judge remains unbiased in making a fair and just ruling based on evidence and facts presented.  Each party will be given a fair and equal opportunity to present their case.

THE PRETRIAL AND SENTENCING PHASES

WHAT HAPPENS AFTER A NOT GUILTY PLEA?

If during Arraignment the defendant enters a Not Guilty Plea, the Judge will set the matter for Trial.

If no agreement reached:

If parties reach a Plea agreement:

If the parties agree to a Plea agreement, the Prosecutor will inform the Judge of the agreement reached. The Prosecutor or Public Defender will then draft the plea agreement and all parties will sign the agreement. The Judge will confirm that both parties are accepting the terms. However, the Judge does not always accept the Plea Agreement for certain legal reasons. If the Court does accept the Plea Agreement, the Judge will then make a decision on the items left up to the Court to determine.

WHAT IS COMMUNITY SERVICE?

Prior to making the request and scheduling a civil marriage ceremony, you will need:

ON THE DATE OF MARRIAGE, you will need to bring the following: